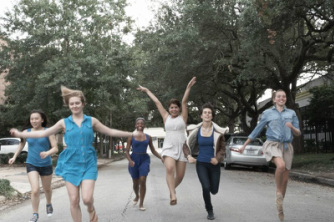 Houston Is So Hot!
Aurora Picture Show brings the heat with a screening of homegrown short films by some of  the Houston's hottest filmmakers and video artists.
Floating: Suspended in Dance by John Carrithers 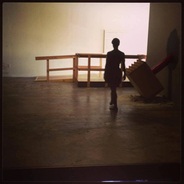 "ONE, Singular Sensation!..."
Courtney heads into rehearsals for A Chorus Line with TUTS. 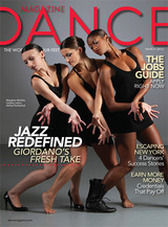 
Make sure to pick up this months Dance Magazine (March 2013) Annual Jobs Issue
Courtney got a chance to chat with Lauren Kay and is featured in their article “Goodbye, New York, "
pg. 39. 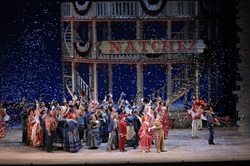 Courtney got her "swing wings" as a Principal Dance Cover for Houston Grand Opera's Show Boat directed by Francesca Zambello and choreographed by Michele Lynch. 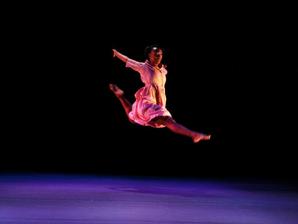 photo Sarah Ferguson
Courtney was invited as the Guest Artist at the YES! Dance Invitational in Richmond, VA where she performed the solo, Do Not Bruise the Water,  created for her by Jane Weiner, Artistic Director of Hope Stone Dance.

"Soloist Courtney D. Jones, of Hope Stone Dance of Houston and one of Dance
Magazine's 25 to Watch for 2012, performed a stunning work titled "Do Not Bruise
the Water," choreographed by Jane Weiner. Jones' intensely personal performance
— tense and athletic, yet somehow softened by a modest pink shirtwaist dress
which she occasionally clutched as if to center herself — left me sitting on the edge of my seat, my heart pounding in my chest."
(Julinda Lewis, Richmond Times Dispatch) 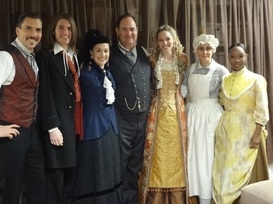 Courtney is cast as Elizabeth in Sarah Ruhl's In the Next Room
at Stages Repertory Theatre.

"Courtney D. Jones perfectly embodies the wit and wisdom of Catherine Givings’ child’s wet-nurse and has one of the most moving monologues in the second act. We cry with her as she recounts the death of her own child and the love she has received from the nursing child." (Buzz Belmont, Houston Chronicle) 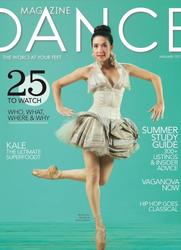 "Courtney D. Jones carries the party inside her, so much so that one just wants to follow her offstage. Wiry and muscular, yet feminine, her body has a story to tell. “There’s something rough around the edges to my dancing,” admits Jones. “When I am approaching movement, I want to be honest. I try not to dance the part, but to be the part.” After four seasons with Jennifer Muller/The Works and a national tour in the ensemble of Wicked, Jones relocated to her hometown, Houston, where she dances with Jane Weiner’s Hope Stone Dance. Her musical theater background makes a good fit for Weiner’s humanistic dances. With the dynamic edge of an Ailey dancer, Jones pushes beyond the dimensions of the shape and invites the viewer to go on the journey with her. Her face stays engaged as if she’s talking directly to the audience, not with words but a narrative conviction.
(Nancy Wozny, Dance Magazine)